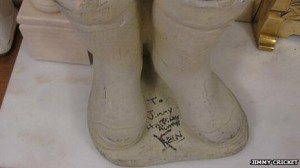 COMEDIAN Jimmy Cricket says he is “gutted” after a pair of concrete wellington boots gifted to him by legendary funnyman Ken Dodd were stolen from his garden.

And he has told investigating police to “look for a burglar with a hernia!”

The sculpture, given as a birthday present, went missing on Tuesday from the comedian’s home in Rochdale.

As part of his stag act, the comedian – real name James Mulgrew – wears wellingtons marked with the letters R and L, but on the wrong feet, in his act.

The 67-year-old added that the boots “aren’t the lightest in the world” and had “high sentimental value” as “Doddy bought me (them) for my 50th”.

The comedian rose to fame in the 1970s after winning a TV talent show. His catchphrase was ‘Come ‘ere, there’s more…”.

He went on to star in his own headline shows on ITV and BBC Radio 2 and appeared in the video for Peter Kay’s 2007 Comic Relief single.

Greater Manchester Police said they were investigating the incident.