BAGGOTT: I DID NOT USE OFFICERS AS CANNON FODDER DURING PROTESTS 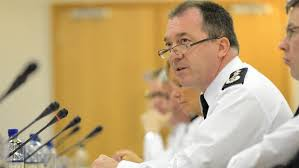 THE CHIEF Constable Matt Baggott has hit back at Police Federation claims that his officers were used as “cannon fodder” during recent the loyalist flag protests and violence.

Matt Baggott told the monthly meeting of the Policing Board on Thursday that the PSNI’s first response to the demonstrations as “measured”.

He was responding to comments made by Police Federation chairman Terry Spence during his conference address to rank and file colleagues on Wednesday in Co Down.

Terry Spence said the policing of the protests, which followed changes to Belfast City Council’s Union flag policy, had been a tactical failure.

He said 136 officers were injured and baton rounds should have been used earlier.

“We are not cannon fodder,” he told delegates.

“Much of our initial difficulty and injuries can be attributed to us slavishly following the Association of Chief Police Officers’ guidelines on tactics to be deployed in the use of baton rounds in public order confrontations.

“To put it bluntly, we were policing public order in NI according to guidelines more appropriate for the rest of the United Kingdom.”

Matt Baggott told the June meeting of the Policing Board: “I will never accept there is any perception that police officers should or will be used as cannon fodder.

“Any such accusation or perception is wrong.

“When colleagues faced that violence with such commendable courage and restraint they had the authorities to deploy AEP (baton rounds).

“You can be assured that AEP’s will never be used for crowd control purposes or to concentrate the minds of potential rioters.

“In my personal conversations with many colleagues including baton round gunners they have told me they chose not to use those authorities because firstly, they are professional and they saw the need for restraint. I commend them because they saw the bigger picture.”