AISLE NOT BE HAVING A BIG WEDDING WITH CHRISTINE, SAYS FRANK 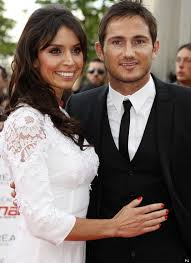 IT’S the showbiz wedding with still no date.

And Chelsea midfielder Frank Lampard says his wedding to fiance and television presenter Christin Bleakley will be “no big show”.

The footballer was on the ITV This Morning show with Phillip Schofield and Holly Willoughby on Thursday.

Phillip cheekily asked Frank: “So when are you going to make an honest woman out of her?”.

“There have been so many rumours about weddings getting postponed and all this kind of nonsense.

“We never had any wedding planned but we are certainly going to get married,” Frank replied.

“But we would love to do it when no one knows and we are just done – no big show. That will be our style I think.”

The couple have been together since 2009 and announced their engagement in 2011.

There has been speculation that their wedding could take place at a venue in Christine’s native County Down.

And there has been intense speculation that the reception will be held in Ballymena’s Galgorm Manor Hotel and Spa.