WE ARE NOT CANNON FODDER FOR RIOTERS, SAYS POLICE UNION CHIEF

PSNI chiefs failed tactically in how they handled Union flag protests and resulting rioting, said the head of the police union which represents rank and file PSNI officers.

And he said plastic bullets should have been used earlier, adding: “They concentrate the minds of rioters.”

In a hard-hitting speech to conference delegates, Police Federation chairman Terry Spence said tougher action should have been taken by the PSNI high command during disturbances.

Scores of police officers were injured and many roads were closed to passing traffic as the row escalated after the council voted to fly the flag on designated days.

In one incident, a ten-strong masked loyalist gang tried to burn a female police woman to death as she sat in her car on the Newtownards Road.

As a result, 246 people have been arrested, 188 of whom have been charged by ‘Operation Dulcet’, the name given to the police investigation.

“There has been a tactical operational failure in how we first handled these public order confrontations,”  said Terry Spence.

“To put it bluntly, we were policing public order in Northern Ireland according to guidelines more appropriate for the rest of the UK,” Mr Spence said.

“The sight of AEPs (plastic bullets) tends to concentrate the minds of potential rioters.

“Too often, it is fear of adverse comment from our politicians that inhibits senior officers from fulfilling their duty of care to the men and women on the ground.” 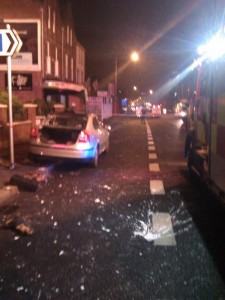 Mr Spence said that since July of last year, 448 PSNI officers had been injured as a result of public disorder.

According to the PSNI, 147 of those have been injured in violence linked to flag protests.

“As a force the PSNI seem to have taken comfort in the mistaken belief that no officers have been seriously injured at these regular scenes of public disorder,” he said.

“We are not cannon fodder.”

He said robust action to clear roads could have resulted in serious public disorder.

The chief constable’s approach was strongly criticised at the annual conference of the Police Federation in County Down on Wednesday.

Mr Spence also condemned the fact that UVF flags have not been removed from several parts of east Belfast.

“It is unacceptable to us as police officers, or indeed to the community, that we appear reluctant to enforce the law because of the fear of provoking uncontainable confrontation with the (loyalist paramilitary) UVF bully boys,” Mr Spence said.

“Our politicians and our police service need to address the perception in the wider community by clearly demonstrating that we are standing up to the UVF as well as the dissident republicans.”

“The police service will do its job, but we would be greatly assisted if elected representatives, especially, understood that they cannot choose which laws they will obey and that the decisions of the Parades Commission are the law,” he said.

The conference heard Mr Spence describe republican dissidents as a “sad group of misfits who cannot accept that violence in pursuit of any political objective, has no place in any democracy”.

He said it was only due to good luck and excellent police work that officers had not been injured or killed in recent dissident attacks.

Deputy Chief Constable Judith Gillespie said police at the time were put in an impossible situation during the flag protests.

“But at a strategic level I’m confident we were doing the right things.