NICE ONE BARNSEY AS PADDY PICKS UP MEDAL IN EURO CHAMPIONSHIPS 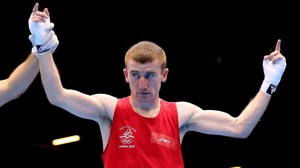 BELFAST boxer Paddy Barnes has clinched at least a bronze medal at the European Championships.

Belfast flyweight Michael Conlan, who won an Olympic bronze at the London Games, will take on Siarhei Loban later on Wednesday.