DUP CALLS FOR END TO ATTACKS ON BUS TOUR FIRM 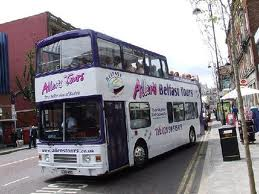 DUP North Belfast MLA William Humphrey has called for an end to the criminal campaign of intimidation and attacks against Allen’s Tours.

On Sunday night, two buses belonging to the company were targeted and destroyed in an arson attack at a commercial maintenance yard.

The Alderman branded the attacks as “sectarian and political fascism”.

Said the MLA: “An open-top tour bus and a minibus for school children were both destroyed in the arson attack on Sunday night.

“On Friday evening, May 31, an Allen’s Tours bus carrying German tourists was attacked on the Springfield Road by a group of around 15 nationalist youths.

“At least one window was smashed with a brick which will have been a shocking experience for everyone on board.

“These attacks are part of a campaign of intimidation against the company which starteded after flag protestors were seen to have boarded one of their buses.

“I have spoken to the company owner, Ben Allen. He has made clear that his company is an equal opportunities employer and regularly takes bookings from groups on both sides of the community.”

The company was recently used by Cliftonville FC during a parade of winning the Danske Bank Irish League.

“His bookings this past weekend included an open-top tour by a football team from a nationalist area celebrating the success of their season,” added the Belfast City Councillor.

“I understand that the incident the previous weekend was a booking by a Scottish Highland band.

“At one stage during its tour more people joined the bus and close to the City Hall some of these waved Union Flags in support of the flag protest outside City Hall.

“Shortly after this was highlighted on the media, the Allen’s Tours office started receiving threatening phone calls from some nationalists.

“There have also been threatening comments made on Facebook, including threats against individuals. This campaign of hatred has now escalated to physical and arson attacks against company buses.

“It is utterly appalling and outrageous that a legitimate company, its personnel and its property should be targeted in this way.

“These attacks represent sectarian and political fascism. Such bully-boy tactics are totally unacceptable. Those responsible must be condemned by all right-thinking people and all political parties.

“I call on political representatives within the nationalist/republican community to speak out against this campaign of hatred and to use their influence to bring it to an end.

“I also urge them to support my call for any information relating to this criminal campaign to be passed on to the police.

“The PSNI must investigate all aspects of this criminal campaign thoroughly, including the threatening comments made on social media.”