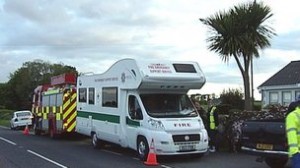 POLICE have released the names of a teenager and a man who died in a drowning incident at a disused quarry in Co Down.

They were 15-year-old Kevin O’Hare and and 39-year-old Colin Polland.

It is understood a group of boys were swimming at the quarry at Grassdrumman Road, Annalong, at about 6pm Saturday when tragedy struck.

Kevin was in difficulty, they ran for help and Mr Polland made a rescue bid.

Kevin O’Hare was from County Down. Mr Polland was originally from the area, but lived in England.

It is understood he had a holiday home in County Down.

Police divers, the Fire and Rescue Service and the coastguard were involved in efforts to save the two men.

The quarry is close to Spence mountain, between Newcastle and Annalong.

An investigation is under way and post-mortem examinations are due to be carried out later on Sunday.

South Down MP Margaret Ritchie said she was “deeply saddened” at the deaths.

“It is very poignant for the family, friends and local community of those who lost their lives,” she said.

“My heartfelt sympathy and that of all the people goes out to the families, friends and relatives of the two men who lost their lives in such tragic circumstances in a disused quarry at the bottom of Spence Mountain in the Mournes.”

South Down MLA Jim Wells said: “The whole community’s thoughts and prayers go out to the two families involved who have suffered this horrendous tragedy.”