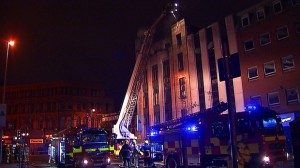 DETECTIVES are investigating after a derelict bank premises was extensively damaged in an overnight fire.

The blaze broke out on the first floor of the old Bank of Ireland building at th corner of Royal Avenue and North Street in Belfast city centre.

The alarm was raised shortly before midnight on Friday and fire crews attended the scene.

A number of streets in the vicinity were closed for a time while the fire was put out.

Police are appealing for anyone with information to contact them at York Road.

The Royal Avenue premises have been derelict for some time, with the bank having closed in 2005.

Last year, protests over government cuts were held inside the building by members of the Occupy Belfast movement.