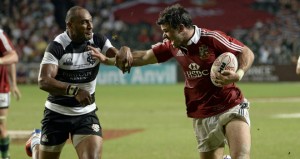 IRELAND’S Paul O’Connell captained to the Lions an impressive eight try win during a 59-8 rampant win over the Barbarians in Hong Kong.

It was a tough workout for the British and Irish Lions ahead of their tour of Australia.

The team effort will have pleased Warren Gatland and his coaching staff as his side wore down their opposition in clinical style before demonstrating their attacking weapons with some eye-catching scores.

Skipper Paul O’Connell, Mike Phillips (two), Jonathan Davies, Alex Cuthbert (two), Dan Lydiate and Alun Wyn Jones all touched down as the Lions ran out comprehensive winners in only their second ever meeting with the famed black and white shirts.

In a feisty opening the Baa Baas served notice they would be provide a sterner and more physical test than the side that were rolled over by England at Twickenham last weekend.

Having kicked a confident early penalty to move the Lions ahead, Owen Farrell certainly found that out as Schalk Brits swung an arm at his Saracens team-mate at a ruck leading the pair to square up.

After reviewing video of the incident referee Steve Walsh reversed his original decision and opted to sin-bin a rather fortunate Brits.

With the sweltering humidity not helping handling, it proved a somewhat error-strewn opening and the Baas Baas drew level on 13 minutes when, after Farrell had missed a second penalty attempt, young Englishman Elliot Daly – one of three uncapped players – booted a long-range penalty of his own.

But as the half wore on the Lions began to take control and quickly established a stranglehold at the set-piece with tighthead Adam Jones totally dominant in the scrum.

After Farrell kicked his second penalty to restore the lead, their first try arrived on 27 minutes and followed their most fluid passage of play.

Forwards and backs combining to force their way relentlessly towards the opposition line and, after Phillips had been stopped just short, skipper O’Connell was on hand to dive over.

The outstanding Phillips did get his name on the scoresheet five minutes later, the Wales scrum-half producing a trademark dummy and dart before holding off Joe Rokocoko to touch down – Farrell converted both and then added his third penalty on the stroke of half-time to give his side a 23-3 lead at the interval.

Phillips grabbed his second just three minutes into the second period as he collected Lydiate’s knock-down pass from a line-out to jink clear and touch down unopposed and the Lions then almost produced a sensational score from inside their own 22 only for Farrell’s pass to Sean Maitland to be batted down at the last moment.

As it was, the Baas Baas responded with a try worthy of their reputation shortly afterwards, replacement Kahn Fotuali’i’s long pass releasing Rokocoko and, after the former All Black winger’s lavish side-step had bamboozled Toby Faletau, Fotuali’i was on hand to collect a return pass and race away to the whitewash.

But normal service was soon resumed, centres Davies and Jamie Roberts combined to ensure the former scored his first try in a Lions shirt and moments later Wales colleague Cuthbert opened his Lions account as he sped clear down the right touchline to finish in style – replacement fly-half Jonny Sexton kicked the first conversion but not the second.

Cuthbert grabbed a similar second in the same corner after neat play from Conor Murray and two more Welshmen, Dan Lydiate and Alun Wyn Jones, put a real gloss on the scoreline as they went over in the closing stages to seal an emphatic opening salvo from the tourists.