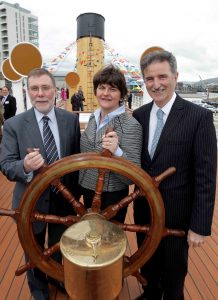 THE SS NOMADIC is officially open to the public from today.

Yesterday, Ministers Nelson McCausland and Arlene Foster and Denis Rooney of the SS Nomadic Charitable Trust performed the official duties at today’s opening ceremony which marks the completion of a £9million restoration programme.

Social Development Minister Nelson McCausland said: “Northern Ireland’s contribution to world maritime history has long been known and now we can lay claim to safeguarding the world’s one and only surviving White Star Line ship, built and restored to glory in Belfast.

“It is wonderful to be able to admire what was admired by those passengers just over 100 years ago and I’m delighted that the Northern Ireland Executive has played its part in bringing this fabulous vessel to a new generation.

“Now, Nomadic will play its part in revitalising and regenerating the local community living in proximity to Belfast Docklands.”

“Visitors can walk in the footsteps of the passengers who boarded Titanic, as the refurbished ship still retains many of its original features.

“It is well worth a visit, not only as a stand-alone attraction, but also in tandem with Titanic Belfast, the Slipways, the Titanic Dock and Pump House.

“The SS Nomadic is another important dimension to the huge Titanic success story and it provides a real opportunity for tourists to stay longer and explore more of Belfast. 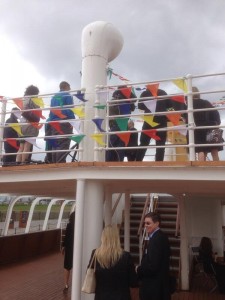 “I am confident that it will attract a wide range of local and overseas visitors, as well as cultural and historical tourists, maritime enthusiasts and special interest and education groups.”

Dr Denis Rooney, Chairman of the SS Nomadic Charitable Trust said: “We are delighted to be able to give the SS Nomadic back to the city which created her.

“This has been a complex project as we had to secure substantial funding in difficult economic times and to find the ideal location in Hamilton dock which required substantial work to prepare her for receiving the ship.

“To see the ship in all her majestic glory today has made all of the hard work worth it.

“The SS Nomadic is a key element in the enduring story of Titanic and I’m confident that the many thousands of visitors who will walk on the same decks as the Titanic passengers did over a century ago will get a unique sense of history and be able to connect to the Titanic experience in a whole new way.”