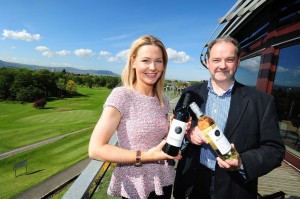 ONE of Ireland’s oldest wine companies Woodford Bourne NI has secured an exclusive contract to distribute NapaValley’s oldest and most awarded wines across Northern Ireland.

Formed in 1868, Beringer is one of California’s finest wineries.

And its Classics range, which includes Cabernet Sauvignon, Chardonnay, Zinfandel and Zinfandel Rosé, will now be available in independent off licences throughout the province.

Beringer is this year’s official wine partner of golf’s famous PGA Tour and to celebrate this partnership, consumers in Northern Ireland can now enter Beringer’s on-pack promotion ‘Putt to Win’ which offers the chance to win £500,000 plus exclusive weekend retreats to the top golf resorts.

Managing director of Woodford Bourne NI, Gareth Bradley, is thrilled to add the well-known Beringer brand to its portfolio.

“We are delighted to win the contract to distribute this brand across Northern   Ireland and we are confident the wine will be a great success,” said Gareth.

“Beringer is a Napa icon, having produced over 130 consecutive vintages, and is the sixth largest wine brand in the world. Beringer’s critical acclaim is unrivalledand with over 100 years of winemaking experience it is no surprise that Beringer has wonWine Spectator’s ‘Winery of the Year’ 11 times,” said Gareth.

“We are looking forward to working with the brand and raising its profile in Northern   Ireland. Given the popularity of golf right across the province, I believe Beringer’s partnership with the high-profile PGA Tour and its current promotion ‘Putt to Win’ will resonate very well with all of our consumers,” he added.

Woodford Bourne NI is part of Robert Roberts which is based in Lisburn and is one of Northern   Ireland’s leading sales, marketing and distribution companies. It currently distributes a number of other wine brands including Torres, Cono Sur, Penfolds, Chapoutier, Mumm champagne, J Moreau & Fils and many more.