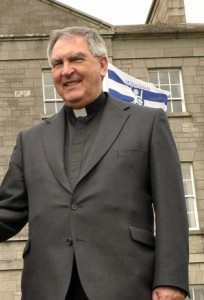 A CATHOLIC parish priest has been released from his duties while a child safeguarding allegation against him is investigated.

Canon John McCabe has been given a temporary leave of absence from his parish in Rosslea, Co Fermangh.

The news was broken to parishoners last Sunday when a priest read a statemnt to the congregation on behalf of the diocese of Clogher.

One parishoner told the local Fermanagh Herald: “He was very well liked.

“He came to us from Castleblayney, and this last few years he hasn’t been in great form. He kept very privately to himself.”

It is not yet known if the PSNI or the Garda who are investigating the child safeguarding allegation against Canon McCabe.

Canon McCabe previously served as curate in Aghadrumsee and Castleblayney.

In a statement, the bishop of Clogher Dr Liam McDaid said: “The diocese of Clogher has been informed of a child safeguarding allegation in relation to a priest of the diocese.

“The allegation relates to some years ago.

“The allegation has been reported to the civil authorities and all procedures laid down by the National Board for Safeguarding Children in the Catholic Church in Ireland are being observed.

“The priest involved has been granted temporary leave of absence from priestly ministry while the matter is being investigated.

“The safety and well-being of children remain of paramount concern to the Diocese and all resources are being used to ensure this.”