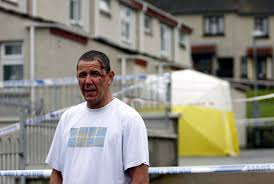 THIS is the man accused of bringing in a £50,000 haul of methedrone seized near Belfast which was shipped in via a courier service from China.

Prosecutors claimed Peter ‘Skeets’ Neill tried to use a vulnerable suspect as a patsy to collect the parcel of deadly drugs after it arrived in Northern Ireland.

‘Skeets’s Neill denies a charge of attempted possession of a Class B drug with intent to supply.

The 45-year-old, of Hazelbank Road, Coleraine, was refused bail due to the risk of re-offending.

Two kilos of a methedrone variation were sent from Shanghai using a freight service in February, the High Court heard.

The package, addressed to a vacant property in Ballymoney, was intercepted by UK Borders Agency.

However, during a controlled operation, the drugs haul was allowed to travel on.

It was taken to a depot in Mallusk, Newtownabbey because no-one was present to sign for it, the court heard.

A judge heard claims that Neill drove to the freight centre with another man and woman.

All three were arrested after he allegedly dropped the other man off to go in and collect the parcel.

According to prosecution lawyer Philip Henry phone calls had been made to check train times and to price a taxi fare back to Coleraine.

He claimed this was an attempt to arrange alternative transport so the other man was not in Neill’s car with the drugs.

Mr Henry said that suspect has been assessed as vulnerable and “easily led”.

“(He) was being used, the prosecution say, as a patsy, whereas this applicant was a controller,” the barrister added.

Joe Brolly, defending, rejected claims of possible interference with the other suspect, pointing out that he is now in custody for separate matters.

Neill, a father of five, has denied knowing anything about the drugs package and stressed he has no links to the house it was to be delivered to.

He only agreed to drive the other man to Mallusk in return for being paid £30, the court heard.

Refusing bail, Mr Justice Deeny held there was a prima facie case of “somebody who took advantage of the modern state of the world just to import this dangerous drug into Northern Ireland and was trying to leave a distance between himself and the drug”.