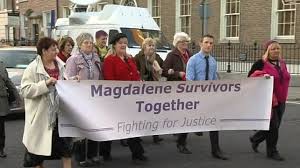 FORMER residents of Magdalene Laundries in Northern Ireland are calling for an inquiry into their abuse allegations.

Hundreds of people could come forward with their claims of abuse if a new investigation is established, or the current inquiry amended.

The current Historical Institutional Abuse inquiry does not cover victims of clerical child abuse and former residents of Magdalene Laundry-type institutions in NI.

But on Wednesday, they will gather to ask for the terms of that inquiry to be extended to include them.

They are backed by Amnesty International, and Patrick Corrigan from the organisation said it is now time for NI’s politicians to take further action.

He explained: “We are now coming to them with those other issues too, particular groups who have been left out of the current inquiry, children who have been abused at community or parish level, and women who were incarcerated effectively in those Magdalene Laundry-type institutions, and who suffered abuse not as children, but as adults.

“It’s now time for the Executive and the Assembly to turn their attention to justice and truth for those groups too.

“Many of these people are now in advanced years and they’ve had to live with shame, with stigma and they’ve a dark shadow cast over the whole of their lives, and a feeling that nobody wanted to know them and nobody was there when they were most vulnerable in their lives.

“They want the state to acknowledge the pain they went through.

“They now want to turn to our political representatives, and we are asking today for those leaders to listen to those victims now as adults, and to give them the truth, the justice and the acknowledgement that they crave before they finally pass away themselves.”

The three-year review, chaired by Sir Anthony Hart, could cost up to £19m.

After hearing from the alleged victims, an acknowledgement forum panel will produce a report to Sir Anthony detailing the claims.

Speaking in the Irish government, Mr Kenny apologised to the victims of abuse after a report found thousands of women forced into the workhouses were physically and verbally abused.

The 18-month inquiry found 10,000 single mothers, women, and girls as young as 11 were forced into detention, mostly in the for-profit laundries. More than 2,000 women were sent to the laundries by the Irish authorities.

Some were detained for petty crime, others for disability, or pregnancy outside marriage.


One Response to CALL FOR PROBE OVER NI MAGADLENE LAUNDRIES ABUSE