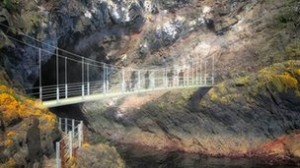 ENVIRONMENT chiefs are to spend £6 million this summer restoring an historic coastal path over 100 years old.

The mile-long Gobbins cliff path on Islandmagee, Co Antrim was built in 1902 and at its height was even more popular than the Giant’s Causeway.

But the cliffside carved pathway with 15 bridges has been shut to the public for over 60 years.

Several attempts have been made over the last 40 years to raise the funds needed to restore the path, but all efforts have been in vain, until now.

Work on a new visitors centre will start this summer and work on the cliff face path will begin in September with final completion by May 2014.

Larne Borough Council is contributing £2m to the project, which is also being funded by the European Union and Ulster Garden Villages Ltd.

The cliffs are home to the largest seabird colony along the coast of mainland Northern Ireland – only Rathlin Island has a larger colony.

Northern Ireland Environment Agency’s Ian Enlander said: “Gobbins cliff path was designated as an area of special scientific interest because of the breeding kittiwake and razorbill.”

The new path will include reconstructed versions of the tubular bridge and a 25-metre suspension bridge which were once part of the route.

Morgan Haylett, the project manager from RPS Consulting Engineers, said he believed it would be a challenge to construct the new path.

“Access is either from the top of the cliff or via the sea,” he said.

“Back in the days (when it was built), the bigger bridges were floated in and then lifted into place and it may very well be that that has to happen this time round too.”

Visitors will be transported from the visitors centre in groups of 12 by minibus to the entrance of the path. They will then be given a guided tour.

Final ticket prices have not been set, but the estimate is £6 per person.

“In the first year we expect around 50,000 visitors, now that is a very pessimistic projection, but we like to err on the side of caution. Underestimate and overachieve,” she said.