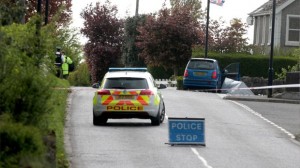 A WOMAN killed in a two car road crash on Monday has been named.

Margaret Gray, the wife of a retired Presbyterian minister, died after a two-car collision at Moyarget Road near the village of Moss-side around 2pm in north Antrim.

Two other people injured were taken to Causeway Hospital in Coleraine.

Their condition it not yet known.

Mrs Gray, who was in her 70s, was the 21st person to be killed on Northern Ireland’s roads this year.

Her husband, the Rev Gordon Gray, was minister at First Lisburn Presbyterian Church for almost 30 years before the couple retired to Ballycastle in 2001.

The couple were well known for their cross community work and had links with the Corrymeela peace centre in Ballycastle.

“I would like to convey my sympathies both personally and on behalf of the Presbyterian Church to Dr Gray and his family at this very sad time.

“I am truly saddened by Mrs Gray’s sudden death. She and her husband played an integral part in community and church life in Ballycastle,” he added.