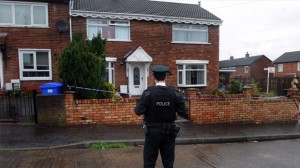 DETECTIVES are are no longer treating the death of a young woman in west Belfast as suspicious.

The body of Edna Walker was found in a house at Highpark Cross, in the Highfield Estate on Sunday just after 5pm.

The 31-year-old was the mother of three children.

Following the results of a post-mortem examination, the PSNI confirmed the death was no longer being treated as suspicious.

A 50-year-old man arrested in connection with the death has being released from police custody unconditionally.