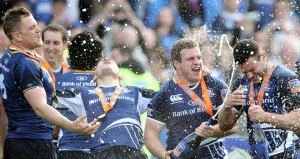 A LITANY of fouls in the first half by Ulster opened the door for Leinster to clinch the RaboDirect Pro12 final in Dublin on SaturdAy.

For most of the season Ulster were the table-toppers and were always in the game from the 4.45pm kick-off.

And thanks to Ruan Pienaar’s deadly boot, the South African kicked all of his team’s points.

But Ulster were let down by their own indiscipline, which was punished by the boot of Jonathan Sexton.

“You start a game and it is important. You want to get the start and things go your way. A couple of lazy penalties from us, they are metres from our line and they took their try really well.

“The season has been long, endurable, cold, wet, but they’re a good bunch of guys.

“We finished last year when I wasn’t here. In the Heineken Cup final we got cleaned out,” he said.

“I think we showed today we are their equal now. I got a lot of heart of what I have seen and look forward to next year as a province.”

Leinster gave coach Joe Schmidt the perfect farewell in his final game as with a final score of 24-18 to win the RaboDirect PRO12 title at the RDS.

Jonathan Sexton, playing his final match for Leinster before moving to Racing Metro, scored 14 points as Leinster claimed the crown for the first time since 2008 and ended three successive final defeats.

Kiwi Schmidt, who will take over the Ireland job later this year, departs with a domestic and European double – eight days on from his side’s Amlin Challenge Cup triumph.

Ulster contributed fully to a tense final, Ruan Pienaar kicking all their points, but tries in each half from Shane Jennings and Jamie Heaslip – plus rock solid defence – got Leinster over the line.

Ulster leaked four penalties in the opening seven minutes as Leinster raced into an early 10-0 lead, Sexton converting man-of-the-match Jennings’ try – the flanker bulldozed over by his fellow forwards – and adding an easy penalty.

Ulster, with Tommy Bowe prominent, fought back and on 24 Pienaar curled over a penalty, then added another in between two from Sexton as Leinster turned around 16-6 up.

Back came Ulster again, a superb break from Paddy Jackson leading to Isa Nacewa being sin-binned for pulling back the young Ireland star by his collar.

Pienaar pulled back three with his trusty boot and the Springbok converted two more penalties – the first after a brilliant kick-chase by Bowe – and suddenly Ulster were just 19-15 down.

But then came the killer blow. Sexton found a terrific touch from a penalty and when the ball was worked infield in a series of phases, Heaslip, with the support of the towering Devin Toner, powered over from close range.

Pienaar cut the deficit by three – and within a converted try – with a monster effort with just 10 nervy minutes left.

But unlike a year ago against the Ospreys, Leinster did not falter late on and a second piece of silverware for the season was theirs.