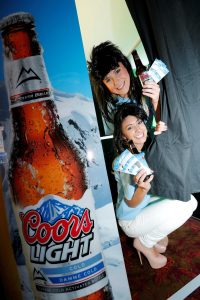 Coors Light promotional girls get snap happy in the Coors Light photobooth which has visited bars all over Northern Ireland.

LOVERS of cold beer know that Northern Ireland’s best-selling bottled beer Coors Light has a unique and innovative bottle that turns blue when it is perfectly chilled and ready to drink.

Now the Coors Light team has made the perfect beer bottle even better by adding a second level of cold to its bottles and cans.

They have cleverly called ‘Damme Cold’, after iconic action film star Jean Claude Van Damme who is the star of their popular advertising campaigns.

Using what’s called ‘thermochromic ink’, the famous Rocky Mountains featured on the label of the Coors Light bottles and cans turns blue when the bottle reaches a chilled temperature but now a second ‘ice cold indicator’ has been added for those who like their beer ‘Damme Cold’.

“Previously, we had one coldness indicator but now there are two thermochromic ink strips on all of our bottles and cans which tell consumers not just when their beer is ‘Cold’ but also when it’s ‘Damme Cold’.

“This year, Jean Claude Van Damme will continue in his quest to get ‘Closest to Cold’ which we will support with TV and outdoor advertising, social media and various on and off trade marketing initiatives, such as ‘Damme Coldfest’. We believe that all of this makes Coors Light Northern Ireland’s must-stock beer brand of 2013.

“Our continued investment in this innovative technology and continuing engagement illustrates Coors Light’s commitment to ensuring that our customers enjoy a refreshing experience, in a way that no other beer can,” concluded Jordana.