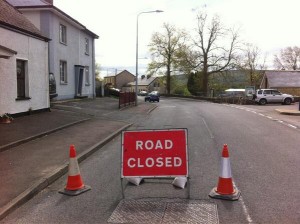 The closed road in Kinawley over security alert earlier on Tuesday

THE PSNI say a security alert in Co Fermanagh has ended.

Police say that following an examination by Army technical officers, a suspect object was declared a hoax.

The Stragowna Road which runs from Kinawley to the Derrylin Road has now re-opened and evacuated residents have been allowed to return to their homes.