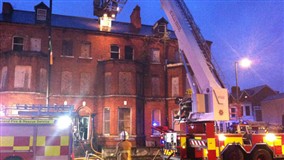 POLICE have released the name of a man who died in a south Belfast fire at the weekend.

Mr Williams was rescued from the top floor flat in University Street by emergency services at around 7pm on Sunday.

However, he was pronounced dead at the scene.

Police are still working to establish the cause of the fire following an examination by Crime Scene Investigators (CSIs).