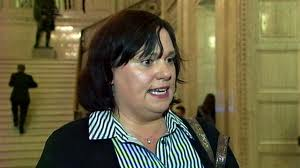 THE cancer-struck sister of an IRA murder victim has accused the SDLP of “putting two fingers up to victims”.

Ann Travers says she is “gutted” that the SDLP is trying to block a bill that would prevent former prisoners guilty of serious offences holding posts as Stormont special advisers (SPADs).

The SDLP could now use a ‘Petition of Concern’ to stop the bill from becoming law.

Ms Travers, who has been undergoing treatment for cancer, said she did not know if the SDLP was representing victims or victim-makers.

The Special Advisers Bill has been drafted by the Traditional Unionist Voice (TUV).

The bill seeks to ban anyone who has been sentenced to more than five years in prison from taking up a post in the future.

McArdle was convicted of the 1984 murder of Ms Travers’ sister Mary as she left Mass in south Belfast with her mum and dad.

Her magistrate dad Tom Travers was injured in the shooting and survived.

Speaking on Tuesday, Ann Travers said: “I feel so disappointed, gutted – I have been punched in the stomach.

On Monday, the SDLP’s Dominic Bradley has said his party had tabled a number of amendments to the bill, including provisions for an appeal mechanism, but all their proposed amendments had been rejected.

“I don’t think that we can be persuaded to live with the legislation,” the SDLP MLA told the BBC. 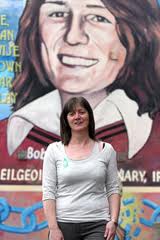 “We’ve made every attempt that we possibly could to shape this into good law, that hasn’t been successful and I think at this stage we are considering supporting a petition of concern.”

However, the bill could be blocked if Sinn Fein, with 29 MLAs, joins forces with the SDLP’s 14 MLAs, to secure a petition of concern.

The SDLP has also come in for criticism from TUV leader Jim Allister.

He said: “Like the victims I am appalled that the SDLP could even contemplate riding to the rescue of Sinn Fein to block the SPAD Bill by signing a Petition of Concern.

“Such a Petition of Concern would not only be a travesty in terms of frustrating the democratic will of the Assembly, but a slap in the face for the Travers family, in particular, who with such courage have led the call for legislative change.

“My Bill is designed to ensure that ‘Never Again’ can victims, such as the Travers family, be re-traumatised by an appointment such as that of Mary McArdle.

“SDLP support for Sinn Fein’s petition would be a very clear declaration by them that such can indeed happen again.

“The choice facing the SDLP is to stand on the side of the victims or protect the victim-makers!”

Mr Allister said in the light of some public comments following the second stage of the Bill he “repeatedly offered” to discuss any concerns the SDLP had. “They neve engaged,” said Mr Allister.

He added: “Before Consideration Stage I shared with the SDLP the amendments I was tabling, which in large part were to meet issues they seemed to have, namely, the ‘blanket ban’ approach in respect of serious convicts and the absence of an appeal mechanism. Hence, the introduction of Clause 3 and the further appeal to the High Court in Clause 4.

“Despite constantly saying they would discuss their amendments with me before tabling same, they never did and proceeded to table their Consideration Stage amendments, thus shutting down the opportunity for discussion.

“After the Consideration Stage I renewed my invitation to discuss any issue with me.

” It was only on May 13 that the first discussions took place. In meetings I sought to stretch to accommodate the SDLP, being willing to contemplate change to Clause 3(3), which seemed of prime concern.

“On May 14 Mr Bradley returned to me to say unless I could give all their amendments required there could be no agreement. Such was impossible.

“The SDLP then tabled their amendments. Interestingly, for a party now threatening a Petition of Concern because their amendments were not accepted, if the Further Consideration Stage had proceeded as originally listed there would have been no SDLP amendments, because they had withdrawn them at that stage.

“The amendment (No 9) whose rejection seems to be causing the SDLP most resentment was the most heavily defeated amendment of them all, being rejected by 85 votes to 12.

“This was the one seeking to remove an expectation that a SPAD should have helped the police in solving the crimes associated with their criminality.

“Considering that Sinn Fein did nothing to help the SDLP get their amendments through yesterday – even, the one which would have exempted sittings SPADs from the Bill – I find it astounding that, nonetheless, SDLP are minded to ride to the rescue of Sinn Fein, when they wouldn’t even help themselves in the division lobbies.

“I trust the SDLP will review their position and listen, not to me, but the plaintiff pleas of victims,” added Mr Allister.