CHILDREN LOST FOREVER AS DEADLY TORNADO KILLS OVER 90 IN OKLAHOMA 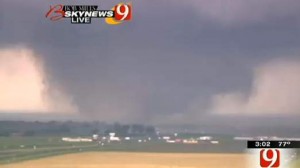 A 200 mph wind-ravaged tornado ripped through a suburb of Oklahoma City, killing 91 people, many of them children, and destroying everything in its path.

In one of the strongest torndoes ever recorded, around half of those killed by ferocious winds in the southern suburb of Moore are thought to be children.

One one elementary school suffered a direct hit from the gusting twister.

The tornado wiped away everything in its wake: entire neighbourhoods were flattened, rendering thousands of people homeless and leaving buildings on fire.

Several children were pulled alive from the wreckage of Plaza Towers Elementary School after the devastating tornado – between one and two miles wide – reduced the building to heaps of rubble and twisted metal.

Rescuers passed the children down a “human chain” to get them to medical personnel for treatment.

Roughly 500 students attend the school. It is unclear whether any had been evacuated before the twister hit, but local media reported some children were taken to a nearby church.

Firefighters were at the scene digging through the debris to reach any pupils possibly trapped inside.

A second elementary school, Briarwood, was also hit but did not appear to have sustained casualties, while Moore’s hospital complex was also badly damaged.

Emergency crews pledged to work through the night across the city to look for survivors, amid reports that another, smaller, storm was on its way to the town of 55,000 people.

The Oklahoma Medical Examiner’s Office confirmed 51 deaths – saying at least 20 children were among the fatalities.

But Amy Elliott, chief administrative officer for the state medical examiner, said they had been told by emergency services to expect another 40 bodies that had been retrieved from the rubble.

Officials at two hospitals said they were treating more than 140 patients, including around 70 children. Dozens of people were said to be in a critical condition.

President Barack Obama spoke to Oklahoma Governor Mary Fallin on the phone and promised the state all the help it needs as he declared the devastating tornado a major disaster.

Ms Fallin told a news conference “hearts are broken” for the parents looking for their children.

“This is a very sad day for the state of Oklahoma – a very hard day and very tragic day,” she said.

“Our prayers and our thoughts are with all the Oklahoma families that have been hit hard by this terrible storm.

“We are doing every single thing that we can to assist those that are in need right now.”

She said communication was hard with power lines and mobile phone towers hit by the storm.

The governor said she had deployed 80 Oklahoma National Guard members to help with the recovery effort and assist search and rescue teams who she said were “looking under every single piece of debris” to find anyone that might be injured or lost.

She had already declared a state of emergency for 16 Oklahoma counties due to the tornado threat on Sunday, and added five more on Monday after the storms hit the state capital.

One mother described how she and her children took refuge in their bath as the tornado tore their house apart.

“My husband told us to get in the bathtub immediately and put on a mattress,” she said.

She said she had to hold her daughter’s hair to stop her slipping away when the tornado struck.

Another family locked themselves inside their cellar – only to have its door ripped open by the twister.

Ricky Stover said: “We thought we’d die. We saw the latch coming undone and we couldn’t reach for it … glass and debris started slamming on us.” 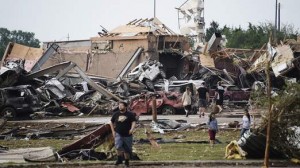 People walk near destroyed buildings and vehicles after a tornado struck Moore, Oklahoma, near Oklahoma City,

The National Weather Service gave the twister a preliminary EF-4 classification – on a five-point scale – with winds up to 200mph.

Several other tornado warnings were also in effect following the devastating twister.

It came just a day after two people were confirmed killed by a tornado nearby.

Residents of Moore had been urged to take shelter as the violent storm moved through the area.

The broad, dark funnel cloud was on the ground for 35 minutes before dissipating.

Some homes were taken down to their concrete slabs.

Aerial footage showed vehicles crumpled and overturned in piles of debris on the motorway, and buildings that had become unrecognisable jumbles of rubble. 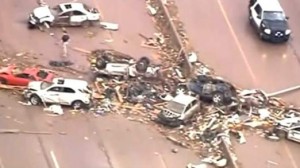 The wreckage on a motorway in Moore, Oklhahoma after tornado strikes

Utility workers rushed to shut off electricity and gas to the area to prevent further danger from live power lines or natural gas leaks.

Footage of the storm showed the monster twister slowly moving through the area and the flashes of power lines blowing.

In Tulsa – 100 miles away – residents reported the debris from the Moore tornado raining down on their neighbourhoods.

The huge tornado was the most recent in a series of twisters that has ravaged towns in the midwest US in recent days as part of a line of violent storms that have stretched from the Canadian border down into Texas.

This part of the country is known as “tornado alley” and residents are trained in how to take shelter.

Most towns and cities are equipped with storm sirens that can warn of a coming tornado half an hour before it hits.

The same suburb was hit hard by a tornado in 1999. That storm had the distinction of producing the highest winds ever recorded near the Earth’s surface of up to 302mph.

Country music star Toby Keith, who grew up in the town, said it would persevere.

“Hometown got hit for the gazillionth time. Rise again Moore Oklahoma,” he tweeted.