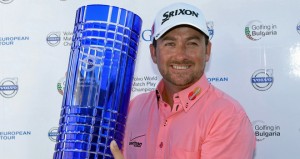 GRAEME McDowell spok of his delight at becoming the first Irish winner of the Volvo World Match Play after victory over Thongchai Jaidee.

McDowell, runner-up last year to Ryder Cup team-mate Nicolas Colsaerts, only took the lead for the first time in the final on the 14th hole after several vital par saves on the front nine at Thracian Cliffs, Bulgaria.

Arnold Palmer won the first World Match Play event in 1964 and the likes of Jack Nicklaus, Seve Ballesteros, Nick Faldo, Greg Norman and Ernie Els all have their name on the trophy.

“It’s very special,” said McDowell, who moved to the top of the Race to Dubai and should climb from eighth to seventh in the world rankings.

“We have been talking all week about how prestigious this event is. I can’t say how excited I am to win it and add my name to that list of legends.

“It was not quite the salubrious golf of this morning (when he was eight under in beating Branden Grace 3&2 in the semi-final). It was a little more tentative, there was a lot on the line.

“I played strongly coming in and I sensed Thongchai was a little fatigued. I really tried to feed off that and show him I was really up for it. He made his first mistake on the 14th and the 15th has been kind to me all week.”

Jaidee, who had beaten South African Thomas Aiken 3&2 in their semi-final, said: “I played very well and only made one mistake on the 14th. I started very well but was a bit tired this afternoon. It’s been a good tournament and second is good enough for me this week.

“Congratulations to McDowell, he is a very good player,” said Jaidee, who had the consolation of £338,000 as runner-up.