FANGS HOLLYWOOD! DRACULA FILM TO BE SHOT IN BELFAST 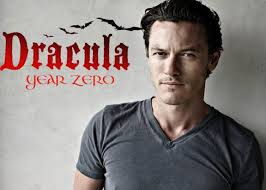 THE FIRST and deputy first ministers have announced that Universal Pictures’ Dracula will be the next large-scale Hollywood production to film in Northern Ireland.

Dracula, directed by Gary Shore and produced by Michael De Luca, will commence pre-production immediately with a three-month shoot that will last from August to November. Production will be based in Belfast with filming across various other local locations.

The feature film stars Luke Evans (Fast & Furious 6, Immortals) and Sarah Gadon (A Dangerous Method, Cosmopolis), in the origin story of the man who became Dracula.

Northern Ireland Screen, funded by Invest Northern Ireland and the European Regional Development Fund, has awarded the film £1.65million production funding which is estimated to deliver £15million expenditure on local goods and services.

First Minister Peter Robinson said: “The Northern Ireland Executive is committed to continue to invest in our creative industries.

“This is fantastic news for the local film industry which further cements Northern Ireland’s reputation as a world-class production location.

“This is the second time that Universal Pictures has confirmed the filming of a major production in Northern Ireland and today’s announcement will deliver an important economic boost through job creation and investment.

Martin McGuinness added: “The film industry is an important sector for our economy and we offer an exceptionally competitive location for film and television production projects.

“With the next series of HBO’s BAFTA award winning ‘Game of Thrones’ series, about to start in July, Universal’s decision to film Dracula here is another strong vote of confidence in our local filming industry and our ability to attract global players.”

Richard Williams, CEO, Northern Ireland Screen said: “We are delighted to renew our relationship with Universal Pictures and look forward to working with Joe and his team.

“Securing Dracula is a real coup for Northern Ireland.

“As well as offering employment for our fantastic crew-base, large-scale productions provide apprenticeship and trainee opportunities, thus helping ensure our local talent base has the opportunity to continue to develop.”

Joe Caracciolo, Executive Producer of Dracula, said: “Filming Dracula in Northern Ireland allows us to capture the extraordinary beauty and topography that resemble the European backdrop in which this story takes place.

“We are very much looking forward to bringing Dracula to Northern Ireland. It makes good financial sense, given Northern Ireland Screen’s film incentive programme, the favourable exchange rate, and an impressive local infrastructure that is well suited for this type of project.”


One Response to FANGS HOLLYWOOD! DRACULA FILM TO BE SHOT IN BELFAST