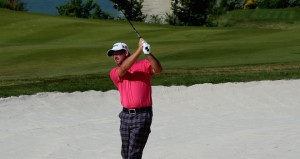 GRAEME McDowell has reached the final of the Volvo World Match Play Championship.

It is the second consecutive year that the Portrush golfer has reached the final.

G-Mac booked his place after producing a faultless display against Branden Grace to beat the South African 3&2 at Thracian Cliffs on Sunday morning.

McDowell, who was runner up in last year’s competition, got off to a blistering start, pitching to two feet for a birdie at the first and holing from 18ft for another on the third.

After conceding Grace’s short birdie putt on the fourth, the Northern Irishman then holed from 20ft to halve the hole and moved three up with another birdie on the next.

Grace reduced the deficit by winning the sixth and was just one down when he birdied the 11th, but McDowell birdied four of the next five to seal victory.

Jaidee, who had beaten Aiken in the group stages, was four up after seven and three birdies in the next four holes from the Avantha Masters winner were only enough to claw back one hole.

A bogey on the 12th from Jaidee threatened to open the door to his opponent, but a birdie on the next restored a three-hole cushion that ultimately proved decisive.