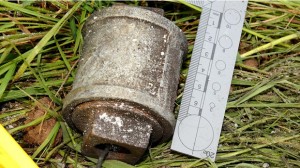 TWO dissident republicans have been jailed for five years in jail for terrorist offences over the seizure of explosives.

Detectives from the PSNI’s Serious Crime branch found seven grenades after policee stopped a car at Mineveigh Road in Dungannon, Co Tyrone in May 2012.

Thomas Hamill and Martin McGilloway, both aged 41 and from the Springvale estate in Dungannon, were arrested at the scene.

They later pleaded guilty to possessing the explosives with intent.

On Friday the men were both sentenced to five years in jail followed by five years on licence.

Police have released pictures of one of the explosive devices found at the time.

A spokesman for Serious Crime Branch said the devices were probably intended to attack police or other members of the security forces.

“The nails, nuts and bolts inside would have caused serious injuries or worse to anyone in the vicinity of these devices exploding,” they explained.

“There is no doubt that the actions of police in this case have protected their colleagues and the public from the serious injury or death. 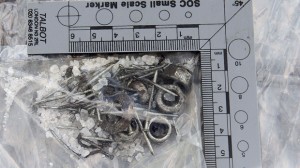 “We will continue to pursue those who seek to bring terror to our communities and put them before the courts.”

They added: “The sentences imposed show that those individuals convicted of serious terrorist offences can expect to lose their liberty for a considerable time.”