PATIENT DIES AFTER CAR CRASHES INTO AMUBLANCE IN WEST BELFAST 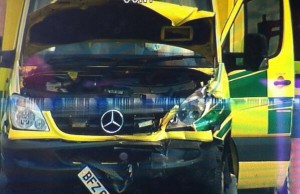 A SERIOUSLY ill patient has died after an emergency ambulance ferrying him to hospital was struck by a car in west Belfast.

Three paramedics were also taken hospital following the collison on Thursday. Their injuries are not thought to be life-threatening.

The crew were transporting the seriously ill man to the Royal Victoria Hospital when it was involved in the crash on the Grosvenor Road, at its junction with the Westlink.

The patient has since tragically died but it is not yet know if it was as a result of the crash.

An Ambulance Service spokesman said: “The crew immediately summoned an additional ambulance to continue the transfer of the original patient to the RVH.

“Further ambulances were required for the three crew and the driver of the car.”

Two ambulance staff were treated for chest pains and head and neck injuries.

A 51-year-old female driver has already been treated and left hospital.

The Grosvenor road off slip of the West Link city bound has been closed at the traffic lights.

Police are urging drivers to avoid the area.