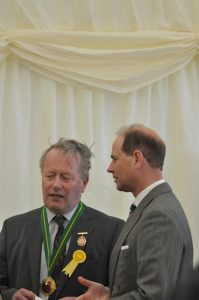 IT WAS a busy opening day at the relocated Balmoral Show.

Yes, there were a few traffic problems getting to the grounds of the former Maze prison sitE, and that is only to be expected, but the show is much bigger and better than before.

Clearly a lot of work has gone into the organisation and its great to see a new venue for one of Ireland’s premier agricultural shows.

Guest appearances by The Earl of Wessex / Viscount Severn who was introduced to the great and good by Robin Morrow, RUAS President.

And there was also a guest appearance on the ASDA stand by celebrity chef Ainsley Harriot.

Ainsley, after 18 years as one of the country’s favourite TV chefs, is something of a national institution.

There are only a handful of personalities whose enduring popularity places them in that rare category where they are instantly recognized simply by their first name.

Ainsley is the master of fresh, fun, accessible cuisine. His food reflects the needs of real life – it’s diverse and delicious but easy to prepare and speedy to cook.

But it was Earl of Wessex who undertook two separate engagements in Co Down.

He was greeted on arrival at Belfast City Airport by Mike Penning MP, Minister of State at the Northern Ireland Office, who accompanied him throughout the day

On arrival the Earl greeted by the Lord Lieutenant of Co Down, David Lindsay alongside the Mayor of Lisburn City Council, William Leathem. Jeffrey Donaldson, MP for Lagan Valley was also present.

This is the first year that the RUAS have held the famous ‘Balmoral Show’ at the prestigious new premises.

Until 2012, the agricultural show was held at the King’s Hall in Belfast when it sold the site for redevelopment.

Balmoral Park will give agricultural show the ability to adapt and grow to keep up with the increasing demands placed on it every year.

The move will allow the event to offer many improvements, including better parking, more space, additional livestock competitions and world-class attractions.

It is hoped that the new showgrounds at Balmoral Park which will be the catalyst for a centre of rural excellence for Northern Ireland.

During his visit the Earl of Wessex visited the Garden Village, where he met with the Young Farmers’Clubs of Ulster, the Northern Ireland Bee Keepers’ Association as well as members of the Women’s Institute.

He also had the opportunity to view the Northern Ireland Food Pavillion which hosts a number of artisan producers, together with farmers supplying the food industry and Agri-food winners.

Following a lunch in the President’s Pavilion, the Earl unveiled a plaque to commemorate the opening of the new Balmoral Showgrounds, before viewing the Cattle Judging, the Sheep Shearing Competition and the Poultry exhibits. .

The second engagement of the day was to The Hub Counselling Project at Ballynahinch, a new project in Ballynahinch which was established by the local churches.

He was met by Chairperson and Minister of First Presbyterian Church, Rev Mairisine Stanfield and Centre Manager, Deborah Boden and heard about the 2 strands of help that is offered to those needing support with mental health issues. Jim Shannon, MP for Strangford was also present.

The Earl of Wessex then took the opportunity to visit The Edge cross-community youth centre located just a short walk from the Hub. 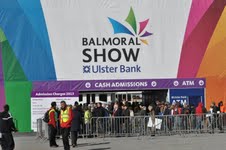 He met the Chair of The Edge Board, Clare Woodward and Centre Manager, Claire Porter who presented a number of young people from the youth centre who had embarked on Outward Bound Projects to Romania and Poland.

Prince Edward also had the opportunity to meet with pupils of Ballynahinch High School and St Colman’s High & Sixth Form College who were involved in a number of community activities.

Before departing, HRH accepted an invitation to sign the visitor’s book and was presented with Edge Hoodie Jacket and Mug by 2 young volunteers.