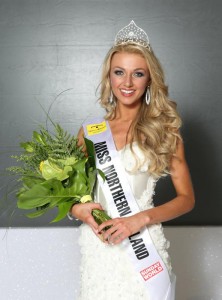 THIS is the stunning Miss Northern Ireland 2013.

Meagan Green, runner up last year to winner Tiffany Brien, was crowned after a glittering gala at the Europa Hotel in Belfast on Monday night.

The University of Ulster student from Lisburn, beat 25 other beauties to this year’s crown.

The prize package includes thousands of pounds worth of prizes including an all-expenses paid trip to Miss World in Indonesia, a Kia car from Downey’s, a wardrobe of designer dresses for Miss World and a cover shoot with IN! magazine.

Afterwards, the 23-year-old said: “I’m in a state of shock, I am just so happy and truly delighted to be taking over the crown and representing Northern Ireland.

“Being part of the competition has been amazing. I honestly never thought I’d get this far.

“I’m thrilled to say the least and I plan to enjoy every single minute of the next year.”