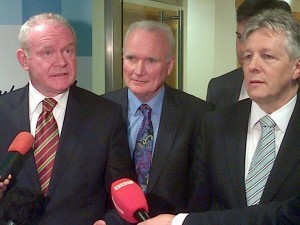 AMERICAN insurance company Allstate is to create 650 jobs at its Northern Ireland operation over the next three years.

The firm currently employs 1,900 people at its premises in Belfast, Londonderry and Strabane.

Almost 200 of the software development, software testing, infrastructure services and analytics posts have already been filled.

It is the largest jobs announcement for Northern Ireland since Bombardier Shorts created 850 jobs four years ago.

First Minister Peter Robinson said: “This announcement of hundreds of new high quality jobs by a top Fortune 100 company sends out a clear and unequivocal message to international investors to have confidence in Northern Ireland as a competitive location from which to grow their business.”

Invest NI has offered just over £4.5million of support towards the expansion, it says it will deliver £20m annually in additional salaries.

Allstate MD Bro McFerran says it has had strong presence here since 1998.

The jobs announcement is a major shot in the arm to Northern Ireland’s economy.

On Monday, Linden Foods in Dungannon announced that it was creating around 180 jobs at its meat processing plant in Co Tyrone.