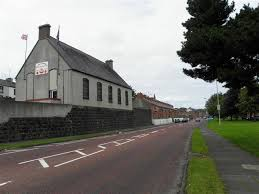 THE Orange Order has branded an attack on a war memorial to soldiers of two world wars as “heinous’.

The war memorial was destroyed by vandals overnight in Coleraine.

A memorial stone outside Killowen Orange Hall at Shuttle Hill was found smashed.

Poppy wreaths were also ripped up and the garden damaged shortly after 7am on Saturday.

The war tribute by Killowen Loyal Orange Lodge is dedicated to local people who fought in World War One and Two.

The Grand Orange Lodge of Ireland appealed for witnesses to pass on any information to police as a matter of urgency.

Coleraine District Master George Duddy said he was disgusted at the destruction.

He said: “This heinous act is not only an insult to the entire community of Coleraine but also to those who sacrificed so much on the front line so that we enjoy the freedoms we have today.

“While those we remember served their country in uniform with honour, the culprits of this reprehensible deed offer nothing but shame.

“They must not be allowed to succeed and local brethren are determined their mark of respect to the war dead is re-instated to its rightful place.”

He added the attack was a bid to raise tensions ahead of the summer parading season.

Grand Master of the Grand Orange Lodge of Ireland, Edward Stevenson, said the perpetrators had carried out “an act of pure depravity”.

He said: “Their cowardly actions, carried out under the cover of darkness, are in stark contrast to the bravery demonstrated on the battlefields by our war heroes.”

The PSNI in Coleraine have asked anyone who noticed any unusual activity in the area overnight or who has any information to contact them on 0845 600 8000.