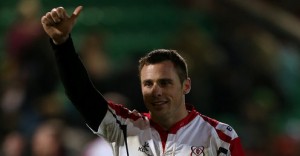 ULSTER saw off Scarlets 28-17 at Ravenhill on Friday night to claim their place in the RaboDirect PRO12 final.

In front of packed home crowd in east Belfast, Ulster finished the season 15 points clear of the Welsh side.

And that huge gulf in class was clear as the game progressed on a rain-swept night in Belfast.

There was little between the sides until Tommy Bowe crashed over for the game’s first try on 25 minutes.

From then on Ulster took control and despite two late tries for Scarlets, the hosts always looked set to reach the final against either Leinster or Glasgow on May 25.

The Scarlets, who were making their first appearance in the play-offs, produced another flat display in the wake of last week’s home thumping by Treviso, failing to score any points between the third and 60th minutes.

They opened the scoring with a third minute penalty from Owen Williams – a late replacement for Rhys Priestland – but Ulster quickly equalised through Ruan Pienaar two minutes later.

After that it was cagey stuff from both sides until Williams had a shot at goal after 17 minutes but the ball hit the right upright and Ulster cleared.

But the game came to life after a tremendous break from Jared Payne and a melee in the Scarlets 22 saw referee Alain Rolland send Andrew Trimble and Liam Williams to the bin, though Payne had just managed to touch down from a Pienaar cross-kick. 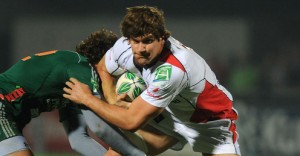 Robbie Diack sees off a Scarlets tackle at Ravenhill

Ulster then began to turn the screw and after Nick Williams had driven on from a lineout near the Scarlets line, Pienaar switched the attack to the blindside and Bowe stepped inside fellow Lions squad member George North to score.

Pienaar added a marvellous conversion and five minutes later Ulster scored again with Robbie Diack touching down at the back of a rumbling maul off a lineout. Pienaar’s conversion hit an upright but he kicked a penalty after the Scarlets scrum collapsed as first-half time expired.

Three minutes after the restart, Tom Court drove over from close range after Darren Cave’s inside burst, following a mix-up in the Scarlets defence allowing Trimble and Rory Best to take the ball into the visitors’ 22.

The game then settled down into a fairly uneventful period which was only altered by substitute Gareth Davies dancing through on the hour mark to score the visitors’ first points since the third minute, with Williams converting.

Pienaar then nailed a 62nd minute penalty to push Ulster up to 28-10 and most of the remainder was about both sides emptying their benches and Ulster players avoiding injury ahead of the final at the RDS.

The Scarlets, though, did finish the stronger and substitute Sione Timani got over in the 78th minute for a consolation score from a quick tap penalty 10 metres out, with Williams again adding the extras.