NI PEOPLE ARE GETTING LUCKIER AT LOTTERY 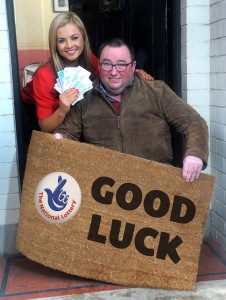 Good luck was with on Peter Laverys doorstep when he scooped staggering £10,2m on th lottery. Now Miss NI Tiffany Brien hopes his good luck rubs off on her

The National Lottery has announced that there has been a sharp rise in the number of millionaires created in Northern Ireland over the past two years.

Lottery mathematicians also revealed that Northern Ireland is climbing the regional league table of major prizes of £50,000 or more

The statistics, which include winners who have gone public and those who haven’t, show that since the National Lottery began in 1994, there have been 67 millionaires from Northern Ireland, an average of 3.72 per year.

However, in the past two years alone, no fewer than 20 millionaires have been created – an average of TEN millionaires per year.

Looking at ‘people who have won life-changing prizes of more than £50,000,Northern Ireland has had 76 ‘high tier’ winners in total over the past two years.

This means that, on average, someone in Northern Ireland wins a massive National Lottery prize every 10 days.

To date, a total of 549 high tier winners have come from Northern Ireland.

A National Lottery spokesperson said: “There is definitely something in the air at the moment in Northern Ireland which is certainly proving to be one of the luckiest postcodes in the UK.

“Since the National Lottery began, we’ve had 67 millionaires from Northern Ireland but a massive 30 per cent of those have been in the last two years alone, during which 20 millionaires have been created.

“What’s more, with someone in Northern Ireland winning a prize of £50,000 or more every 10 days, the region really is enjoying a golden patch at the moment so players should make sure that they make the most of this luck while it lasts.

“Lottery luck can live anywhere and it could be you celebrating tonight if you have a ticket for the next big National Lottery draw. We would be delighted to see our next big winner come from Northern Ireland.”

The National Lottery is available to play at retailers throughout Northern Ireland or online at www.national-lottery.co.uk.

Here’s a look at the Top 10 National Lottery winners to date in Northern Ireland.

However, these are just the millionaires who chose to go public and that there are lots more ‘secret’ millionaires across the province… perhaps one of them lives right next door!

Who knows… maybe you could be the next winner to join this illustrious list?

Housewife Iris Jeffrey from Belfast remains the biggest single Lotto jackpot winner in the history of the National Lottery after scooping an incredible £20,100,472 Lotto Rollover jackpot on Wednesday, July 14. Her winning ticket was bought at Tesco’s in Ballygomartin and the winning numbers were 06, 27, 33, 38, 45 and 47. 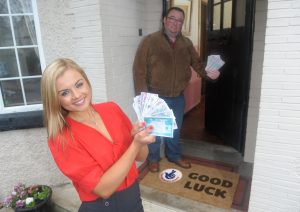 Good luck was with on Peter Laverys doorstep when he scooped staggering £10,2m on th lottery. Now Miss NI Tiffany Brien hopes his good luck rubs off on her

Belfast bus driver Peter Lavery from the Short Strand scooped a massive £10,248,233 million on May 18, 1996. Since his lottery win he has become a leading business figure in Belfast, successfully investing in property development, restaurants and bars and his very own whiskey label. Peter also set up his own cross-community charity The Rita Charles Trust, in honour of his late mother and father, which has donated a lot of money to various projects in disadvantaged areas of Belfast and has made a significant donation to integrated education – an initiative keenly supported by Peter.

Londonderry man Ryan Magee is Northern Ireland’s third biggest National Lottery millionaire, having won £6,462,181 on February 8, 2008. One of his first purchases on winning a share of a massive £96 million EuroMillions jackpot was a brand new Ferrari. The 27-year-old IT specialist had a premonition he would win and was so sure he would strike it rich that he bought 11 tickets in four different towns – and one of them did the trick. The winning ticket was bought in Strabane at the Centra in Ballymagorry Post Office.

Seamus Duffy (49) from Greysteel in County Londonderry won a Lotto jackpot of £4,593,096 on August 1, 2009. At the time he had been unable to work for the previous year because of arthritis but the former building site digger driver hit big with a Lucky Dip® ticket. Mr Duffy bought the ticket at a Spar store in Garvagh and his winning numbers were 4, 6, 10, 28, 35 and 39.

Eamonn Morrison and his wife Maura from Cloughmills near Ballymena in County Antrim scooped £3,530,184 on Saturday November 17, 2001. They used the same two lines every week with an additional three Lucky Dips. Indeed it was a Lucky Dip that won them their fortune and it couldn’t have come at a better time as Eamonn had recently been made redundant. The winning numbers were 12, 19, 30, 34, 37 and 41 with the bonus number 1.

County Antrim nurse Paddy Millar got his wife’s age wrong and won a £1,994,322.90 National Lottery fortune because of it. The 50 year-old Ballymena man plumped for family birthdays and anniversaries in the EuroMillions draw on Friday August 10 2012, and by putting his wife Gail’s age down as 48 instead of 49, his ticket came up with five winning numbers and one lucky star – and a very nice cheque indeed!

Londonderry man Denis Doherty scooped £1,655,605 in the Lotto draw on Saturday July 7 2007 – thanks to a child crying in his local shop. When the retired Du Pont worker went to buy his weekly lottery ticket, a woman behind him was trying to calm down her young son. This prompted him to quickly choose a random selection of numbers, which luckily resulted in him winning a one third share of the Lotto jackpot. Denis bought his lucky Lotto ticket at Spa, Trench Road, and the winning numbers were 16, 22, 28, 30, 33 and 35, with the bonus ball 37.

Top 10 National Lottery millionaires in Northern Ireland (at a glance)


One Response to NI PEOPLE ARE GETTING LUCKIER AT LOTTERY