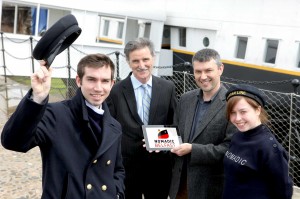 TOUR tickets for the SS Nomadic will be available from 12 noon on Friday, May 10 as the last surviving White Star Line vessel gears up for its official opening at the end of May.

For the last seven years, the vessel,  affectionately known as Titanic’s ‘little sister’, has undergone an extensive £9m restoration project.

And it will be open to the public from 1st June.

Visitors to the ship will be accommodated via a series of pre bookable tours, details of which are now available on the SS Nomadic’s website on www.nomadicbelfast.com

Denis Rooney CBE, Chairman of the Nomadic Charitable Trust said: “We are delighted to be in a position to start taking tour bookings for the vessel when she opens to the public in June.

“The SS Nomadic is a totally unique link with Belfast’s rich maritime history and I’m confident that when visitors start arriving in June they will be impressed by the level of detail and craftsmanship that has gone into restoring one of Belfast’s most important surviving ships of the last century.

“Few attractions around the world can claim the direct Titanic lineage the SS Nomadic can and her opening will add another important dimension to the huge success story which Titanic Belfast has helped to drive over the last year.”

The SS Nomadic was purchased at auction by the Department for Social Development and was transferred to the Nomadic Charitable Trust.

The SS Nomadic will be open for scheduled public tours from 10am on Saturday 1st June 2013.