GEORGE BEST GETS STAMP OF APPROVAL 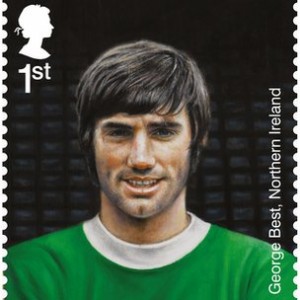 FOOTBALL genius George Best features on a new set of stamps which have gone on sale on Thursday.

It marks almost 50 years after he first pulled on the famous red Manchester United jersey.

East Belfast George signed on the dotted line for Manchester United at 17.

His sister Barbara McNarry said he would have been very proud of the stamp and said it was “sad that he isn’t here to appreciate this accolade”.

She added: “I am deeply honoured to see George being recognised in such a special way by Royal Mail in this significant year for the Football Association.

“I am sure fans, not just from Northern Ireland and Great Britain, but from around the world will enjoy and treasure this tribute.”

All stamped mail posted to Belfast will also have a special George Best postmark.

Best is one of 11 of the greatest football heroes from Northern Ireland, England, Scotland and Wales to feature on the new stamps.

Sir Trevor Brooking, FA director of football development, said: “Everyone who loves football has their favourite players from the past.

“It might have been one of the greats they tried to emulate in the school playground or a superstar they would idolise while watching on from the terraces as a fan.

The stamps have been illustrated by artist Andrew Kinsman, who used photographs of all the players.

He then created a composite artwork, so that when the 11 stamps are placed together, they form a traditional team shot.

The 11 players selected were chosen for their outstanding record on the pitch and representation of their home country.

Andrew Hammond of Royal Mail said: “Across England, Scotland, Northern Ireland and Wales, we’ve been lucky enough to witness some of the finest footballers to ever play the beautiful game.

“The UK has given the world some of the greatest sports and football is rightly celebrated as a national obsession.

“The stamps celebrate heroes of the beautiful game who excelled on the pitch at club and national level, and are rightly considered icons of the sport.

“We feel there is no more fitting tribute to the game’s 150th anniversary than this collection of football heroes on stamps.”