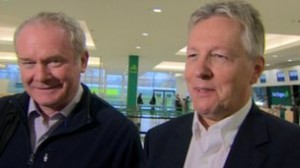 PETER Robinson and Martin McGuinness are preparing to unveil a plan to resolve the issue of flying flags over government buildings across Northern Ireland.

The First and deputy first minister said they were close to putting a mechanism in place to deal with the issue.

However, they are giving few details away on the plan saying it should be ready in a few weeks time.

They said they would have discuss the plan with their party members and other parties in the Stormont Executive.

Finance minister Sammy Wilson has ordered the union flag to be flown at five more government buildings at a cost of £10,000.

But during a visit to wind farm at Carn Hill, Newtownabbey, Co Antrim, they told reporters they hoped to be able to make a more detailed announcement in the near future.

The move by Mr Wilson will mean the union flag being flown on 18 designated days.

This is in line with other buildings, including Belfast City Hall.

Sinn Fein, the SDLP and the Alliance Party have all criticised Mr Wilson over the flags move.

A Department of Finance spokesperson said the move was allowed under existing regulations.