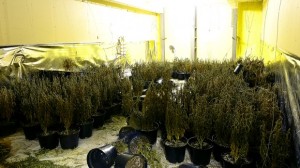 Almost £500,000 worth of cannabis plants seized during raid in Co Antrim

THIS is the haul of cannabis plants police have seized during a raid in Co Antrim.

The Old Portglenone Road premises housed cannabis plants which had a street value of almost half a million pounds.

They were uncovered during an operation by the PSNI’s Organised Crime Branch on Monday, 29 April.

Detectives Inspector Andy Dunlop of the Organised Crime Branch said: “The photograph shows the scale of the operation, which resulted in the seizure of cannabis plants which would have had a potential street value in the region of £450,000.

“This investigation has reduced the potential harm to the community.”

The senior police man said they are moving to prosecute those behind the drugs factory.

“I and my officers will continue to work with our Organised Crime colleagues to ensure that the threat to our community posed by drugs is significantly reduced and together with the help of our local communities we can make our streets safer.”