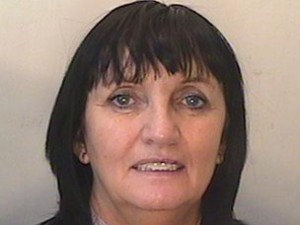 THE PSNI have appealed for help in tracing a woman who went on the run after being charged with fraud.

Julia Holmes, who is in her 60s and is known to use around 40 false identities, was charged with two counts of fraud by misrepresentation totalling £18,000.

She was on bail from Downpatrick Magistrates Court but failed to return to court in January 2011.

Holmes was given bail despite warnings she was a flight risk and was electronically tagged.

A warrant was issued for her arrest.

Holmes is believed to have conned victims in America, including one businessman for £500,000.

She also once claimed that former US President George W Bush gave her a chair from the White House.

It is understood that Holmes fleeced a number of rugby clubs in Northern Ireland of tens of thousands of pounds.

She conned them into giving her a VIP box including food and beverages for her highly-impressed guests but absconded without paying for it.

Holmes has even ordered flowers valued at just £100 and fled without paying for them, but most of her victims are stung for thousands or tens of thousands of pounds.

Police believe she was most recently in the Galway area of the Republic of Ireland.

However, they have said she could be in any one of a number of places.

She is about 5ft 5ins tall with blue eyes. She has been known to change hair colour and style.


One Response to PSNI HUNT ON THE RUN CON WOMAN