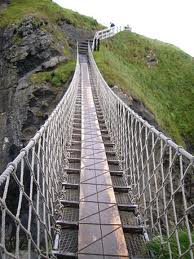 A WOMAN injured while out walking had to be taken to hospital by helicopter.

The drama unfolded at the Carrick-a-Rede Rope Bridge on the north Antrim coast on Sunday.

It is undersood the woman was out with her family on the island connected to the north Antrim coast by the famous rope bridge when she slipped and fell.

Paramedics and members of the coastguard from Ballycastle and Coleraine decided it would be too hazardous to carry the woman back across the rope bridge.

The Irish Coastguard sent a helicopter to airlift the woman to the Causeway Hospital in Coleraine where she was treated and discharged.