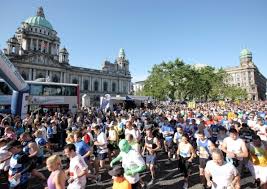 THOUSANDS of runners at the Belfast City marathon have held a minutes silence for those killed and injured during the Boston bombings.

Three people, including an eight-year-old boy – died last month during two blasts close to the finish line of the marathon in the American city.

On Monday, more than 17,000 participants paused at the Belfast City Hall starting line before beginning the 26-mile route through the city.

The marathon will take participants out to Duncrue and back to the finish line at Ormeau Park. There will be further

The area around city hall will be closed until 10am, while motorists will not be able to reach the Ormeau embankment until after 5pm.

Traffic delays can also be expected along the Albertbridge Road, Holywood Road and Sydenham Bypass and the Victoria Street area until shortly after 11am.

A Belfast City Council statement said: “Disruption can be expected around the four changeover points for the Marathon Relay event.

Disruption also can be expected on the country-bound Antrim Road, from around 9.45am until around 11am. Belfast Zoo will be open as normal, with diversions in place for access.

The Ethiopian will be hoping to come in ahead of fellow countrymen Wosen Zeleke Demse, Ashenafi Eshetu Deme and Birhanu Niguse Melese.

Lemlem Berbe Yachem will be the woman to beat on the day, as the 21-year-old tries to improve on her personal best of two hours 34 minutes and 38 seconds.

The leading local runner is Irish international Thomas Frazer, from St Malachy’s Athletics Club, who will be trying to improve his personal best time of two hours 18 minutes and 37 seconds.