EUROPEAN FOOTBALL FOR GLENS AFTER CUP FINAL WIN OVER REDS 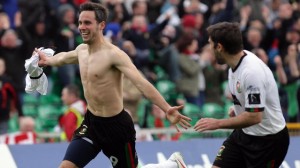 ALL the smart money was on Cliftonville to lift the Irish Cup and bring the treble back to Solitude.

But undedogs Glentoran came to Windsor Park on Saturday determined to ruin the Reds party and bring the Marie Curie Cup back to east Belfast.

It was a bad day at the office for Cliftonville who started off brightly in the first half but lost their form in the second half and in extra time to a fitter looking Glentoran team whose hunger for silverware was apparent in the final 75 minutes of the showpiece game of the season.

Two goals from Andy Waterworth helped Glentoran win the Irish Cup for the first time since 2004 with a 3-1 victory over Cliftonville.

The win now propels Glentoran into European football next season.

It will be a much needed cash boost to the Oval club who have struggled to pay their players’ wages for part of the season.

Waterworth equalised on 64 minutes to the sheer delight of the travelling Glens’ fans.

Cliftonville’s Joe ‘The Goal’ Gormley had given the treble-chasing Reds a first-half lead.

The final went to extra-time and Jimmy Callacher headed the Glens 2-1 up before Waterworth shot in the third.

Cliftonville’s Ciaran Caldwell and Richard Clarke of Glentoran were sent-off near the end.

They got straight red cards for clashing as Clarke reacted furiously after being stamped on by Barry Johnston.

Clarke was back in the dressing room as his Glentoran team-mates completed a remarkable triumph under manager Eddie Paterson, who had been sacked by Cliftonville just two years earlier.

And a day to remember too for veteran Glens defender Colin Nixon, who came on as a substitute for a record 794th and final appearance.

To lift the cup along with skipper Elliott Morris was a brilliant finale for Nixon, but that fairytale ending looked unlikely after a first half dominated by Tommy Breslin’s double winners.

Cliftonville should have been ahead before Gormley’s breakthrough goal.

The goal which the all-conquering Reds had been threatening did come when Boyce slipped the ball through to Gormley.

Keeper Morris raced out to block but,
when the ball came off defender Callacher, it fell for Gormley who forced in the opener.

The goal meant Gormley became only the third player in Cliftonville’s 134-year history to score 30 in a season.

There was a brief delay to the action after a couple of missiles were thrown on to the pitch from the north stand where Glentoran fans were seated.

Glentoran produced a much better display in the second half and ultimately denied the Solitude side a historic domestic treble.

Waterworth, in what could be his last game in a Glentoran shirt having been linked with a close-season move to Linfield, struck a close-range equaliser.

Richard Clarke played the ball in from the left, David Howland did well to turn it into the danger area and Waterworth pounced instinctively to shoot in from about five yards.

Boyce then had a header saved by Morris while Glens substitute Jim O’Hanlon sent a low shot wide.

Cliftonville would have taken the lead early in extra-time but for a wonder save by Morris from substitute Martin Donnelly’s first-time effort.

That looked all the more crucial as Callacher got ahead of his marker Aaron Smyth to head the Glens into a 2-1 lead in the ninth minute of extra-time.

Two minutes later Waterworth worked his way into the box and netted an angled shot to make it 3-1.

Cliftonville seemed to have run out of steam after their superb season.

The double dismissal of Caldwell and Clarke was a disappointing ending – but it will not overshadow a memorable day for Glentoran.

The east Belfast club has been dogged by financial problems and, earlier in the season, players refused to train because they had not received their wages.

Money cannot buy the feeling of being a cup winner – boss Patterson and his Glens heroes end the season well in credit.