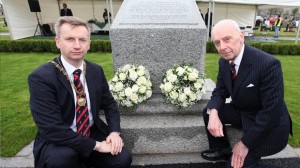 WREATHS have been laid at a newly-refurbished memorial to 154 unidentified victims of the Belfast Blitz.

Thousands of people died and large parts of the city were destroyed during the two major Luftwaffe air raids of  April 14 and May 4, 1941.

On Friday, the eve of the 72nd anniversary of the final raid of the blitz, a commemoration was held in City Cemetery at the grave of the 154 unnamed victims.

The plot, which is marked by a granite memorial stone, has recently undergone a £30,000 refurbishment.

“This marks the anniversary of one of the four blitzes on Belfast and we thought this a highly appropriate occasion to have this plot rededicated,” he said.

“The refurbishment of this grave complements the restoration last year of the blitz grave in Milltown, where a further 20 bodies are buried.

“We’re very indebted to the council for such a splendid refurbishment and rededication.

“Citizens of both traditions are therefore honoured and remembered.”

The council said many improvements have been made to the plot.

It has been re-edged with Mourne granite stone to match the existing memorial and the plaque has also been cleaned and re-engraved.

Work has been done on the four corner stones and the surrounding ground has been levelled and landscaped.

The finishing touches include a new pathway for improved access to the memorial, one of several in the cemetery relating to the Second World War.

High Sheriff of Belfast, Councillor Brian Kingston, said: “These attacks by the Luftwaffe were carefully planned and exposed the vulnerability of Belfast resulting in over a thousand people being killed.

“So it is fitting that we mark the 72nd anniversary, almost to the day, with something positive – the refurbishment of this memorial which commemorates those who lost their lives and have no known graves.

“The memorial stone marks the graves of those who remained unidentified as a result of the blitz attacks.

“It is also a focus for each of us to remember and to reflect on how tenacity and endurance help us overcome dreadful events to build a better future.”