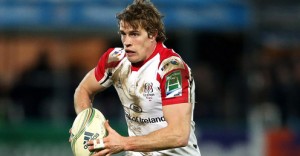 ULSTER were crowned RaboDirect PRO12 league winners after a 37-13 victory over Cardiff Blues at Ravenhill on Friday night.

The Ulster team maintained their fine home record with a bonus-point triumph and can now look forward to a home semi-final meeting with Scarlets in the play-offs.

Ulster came into the final match of the regular season needing three points to clinch the title and, with Cardiff’s play-off hopes well and truly over, they started as strong favourites to do so.

But the Blues, who had already recorded two away victories over Irish provinces this season, threatened to upset the apple-cart when Dafydd Hewitt crossed inside four minutes.

The home side could have been forgiven for suffering early nerves but that setback simply kicked the men in white into gear.

Ruan Pienaar swifly wiped out the deficit by converting his own try before trading penalties with Rhys Patchell.

But the Blues got back in front again shortly afterwards when Patchell kicked a neat drop goal and there were no further scores in a scrappy remainder of the half with the visitors leading 13-10.

Ulster hit the ground running on the resumption and after Nick Williams had carried strongly off a scrum, Paul Marshall spun the ball right to Andrew Trimble who smashed over and got the nod from the TMO.

Pienaar converted and then added a long range penalty shortly afterwards to give his side a 20-13 lead.

This was then increased to a 10-point lead after Patchell spilt a Pienaar Garryowen and the Blues conceded a penalty.

With the rain now falling heavily, Patchell was wide with a penalty attempt to get the Blues back in the game and Ulster immediately punished his profligacy when a mix-up at the back saw Trimble race on to grab his second try of the night.

Pienaar superbly converted and Ulster now looked secure and out of sight at 30-13 and with both benches beginning to empty the game became even more fractured and scrappy.

Ulster bungled a number of scoring chances and then with Hewitt sent to the bin, 100-cap man Robbie Diack charged over at the posts which Pienaar again converted with three minutes remaining.