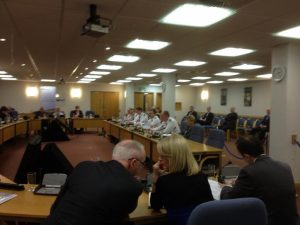 PSNI Chief Constable Matt Baggott has called on the First and deputy First Ministers to clarify the flag protocol in Northern Ireland.

It follows claims that there are now more flags on display around Belfast than ever before.

At a meeting of the Policing Board on Thursday, Sinn Fein’s Gerry Kelly asked for clarification on the removal of paramilitary flags.

Mr Baggott said erecting a flag to cause offence is not a crime but it is wrong.

“We have been waiting a long time for the flags protocol to be reviewed, revised and made crystal clear who takes responsibility,” he said.

“We need to be very clear and have the political support to define what the PSNI’s role is.”

Hundreds of flags were erected around east Belfast some three weeks to mark the 100th anniversary of the formation of the UVF.

Many have now been removed but some remain.

Assistant Chief Constable Will Kerr said the increase in the number of flags is the residue of the tension surrounding changes to the policy of flying the Union flag at Belfast City Hall.

He explained: “There is no such thing as an illegal flag – I think there is sometimes a bit of confusion as to where the law stands.

“We seem to have had significantly more of these flags going up this year and some of that reflects residual tension from the flags dispute over the winter.

“It makes the policing of these areas more difficult in general when people mark their territory beyond the traditionally marked territories – particularly in east Belfast – but this is not an area where we are going to fix it ourselves, we are waiting for a review of the 2005 flags protocol which might lead to a more joint-up solution.”