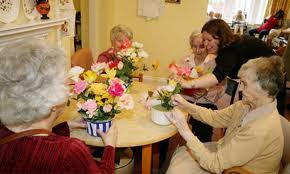 FIRST Minister Peter Robinson says he believes all nursing homes should not close and health trusts should “seriously need to look at that again”.

The Western Trust is expected to go to consultation on closing the four homes it operates in Londonderry, Greenfield and Strabane following a meeting on Thursday.

The Northern Trust is planning to close all of its homes, with similar proposals said to be in place in the Southern Trust area.

Health Minister Edwin Poots has agreed that around half of residential homes in NI should close as part of the Transforming Your Care (TYC) reforms.

However, the Minister said the way the potential closure of NHS residential homes in Northern Ireland had been handled was “disastrous”.

Mr Poots said: “I would be very surprised if all of the homes in all of the trusts closed.”

The proposals for the Western Trust were discussed at a public meeting of the trust’s board on Thursday.

The homes affected are Rectory Field and William Street homes in Londonderry, Greenfield in Strabane and Thackeray Place in Limavady.

Belfast, the largest trust area, began the process in 1990 and has since closed 10 homes.

The remaining three, Pine Lodge, Chestnut Grove and Grovetree House, will close in five years, under natural circumstances according to a spokesperson.

The three have a total of 20 residents.

Over the past decade, a majority of older people who required care in Belfast have moved to places in the private sector/independent sector.

On Wednesday night, officials from the trust briefed residents and their families at two of the homes – William Street and Greenfield.

The Southern trust’s decision will affect 80 residents, in the Northern trust the number is 154, and in the South Eastern trust area 128.

In the Western trust there are 128 places available. A spokesperson said 73 of these beds are currently occupied.

The normal meeting of the Western Trust board is currently taking place.

It is understood care homes are on the agenda and there will be a mention they are moving to consultation.

The proposals could see the closure of four homes – Rectory Field and William Street in Derry, Greenfield in Strabane and Thackeray Place in Limavady.

These four homes have a total of 73 residents, although there is room for almost double that, and they employ around 100 staff.

“I’m not quite sure how any trust can justify the closure of all their homes and I think they seriously need to look at that again.

Sinn Féin deputy First Minister Martin McGuinness said the Health Department needs to “get a grip” on the issue.

“Any transitional period which causes fear and anxiety amongst the older population is something that needs to be dealt with and unfortunately we have seen fear and anxiety on our TV screens over the last few days,” Mr McGuinness explained.

“That is unacceptable and it’s incumbent on the Health Department to get a grip on what’s happening and make it clear that this will be dealt with in a sensitive way.”

“There is talk of a consultation period for 12 weeks following tomorrow’s board meeting, however it does seem to be a fait acommpli.”

“It is a disgrace that these vulnerable adults are being treated in this manner – they are seen as just a commodity that if it no longer suits the Trust Delivery Plan can effectively be gotten rid off,” said Alison Millar, NIPSA Deputy General Secretary.

“NIPSA will be fighting all of these unnecessary cuts across all Trust areas.

“We will be linking with other trade unions, community groups, the residents of the facilities and wider society to ensure these decisions are reversed and our elderly citizens are treated with respect and dignity.”