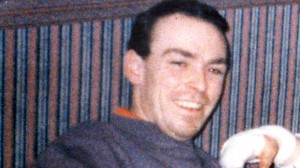 ‘WAKING The Dead’ detectives have reopened a probe into the brutal murder of a man almost 15 years ago.

Charlie Strain was found beaten in his flat in the seaside town of Carrickfergus, Co Antrim in June 1998.

To date, no one has been charged with his murder.

Detectives from PSNI’s Serious Crime Branch said the 28-year-old victim was last seen getting out of a taxi late on Sunday, May 31 to walk to his flat in Carnhill Walk.

Mr Strain did not turn up for work at a local meat processing plant the next day.

His father, Charles Strain Senior, was concerned and called at the flat shortly after 10.30am on Wednesday 3 June.

After forcing his way in, Mr Strain Snr found his son lying dead on the settee in the living room.

He died from injuries sustained during a brutal attack on his head and body.

Police investigated the murder at the time, and made a renewed appeal in 2003. Although a number of people were arrested, no one was charged in connection with the murder.

Detective Inspector Peter Montgomery believes the men who made three emergency calls on the night of Mr Strain’s murder could hold the key to information about his death.

Calls made on Monday 1 June from public phone boxes at Bridewell Drive and Oakfield Drive reported an assault at different addresses within the Carnhill Walk block of flats.

DI Montgomery said: “We have a number of pieces of evidence which lead me to believe that progress can still be made in this case, despite the passage of time.

“I believe there are people still in the area who know those responsible for the attack on Charlie which led to his death and who know about the events leading up to his death.

“I would appeal to anyone with knowledge about the events of those days at the end of May and start of June 15 years ago in Carnhill Walk and elsewhere to come forward and talk to us.

“Your information could provide us with the vital link to enable us to bring this investigation to a successful conclusion.”

Police are also keen to speak to anyone who saw Mr Strain on the evening of Sunday, May 31 the last night he was seen alive.

They want to talk to anyone who saw or spoke to Charlie in Chandlers Bar in Carrick or later at the Tourist Inn at Eden.

Anyone with information about Mr Strain’s murder can contact detectives on 0845 600 8000 or confidentially on the freephone Crimestoppers number 0800 555 111.