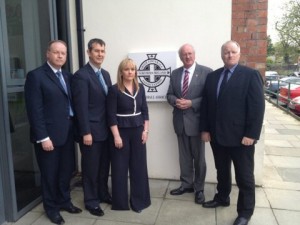 THERE is no threat to the national anthem not being played at international football games.

That was the message given to a DUP delegation who met with senior IFA officials on Wednesday afternoon.

It was called after the IFA decided not to play God Save the Queen before the Irish Cup final this Saturday, May 4 between Cliftonville and Glentoran.

The IFA said the decision by the Challenge Cup Committee was to provide a neutral venue for fans attending the game.

However, officials told the DUP delegation that this would not set a precedent for international matches.

During the meeting which started at 2pm. the IFA officials were questioned over the decision to have no anthem before the final between Cliftonville and Glentoran at Windsor Park on Saturday.

“We pressed the IFA about the standing of the decision taken by the Committee and the procedures used. The IFA have promised to provide the detailed information about this and I look forward to receiving it,” said Michelle McIlveen who was joined by party colleagues David Hilditch, William Humphrey, Edwin Poots and Strangford MP Jim Shannon

She added: “We were fully reassured however that this decision by the Challenge Cup Committee has no impact upon the National Anthem at international matches. This was one of the concerns we raised with the IFA representatives.

“I know many football fans were concerned that some people would use this incident to re-open an unnecessary debate on that issue.

“Whilst we outlined our belief that the National Anthem should be played at the Irish Cup Final it is also important to stress that Saturday should only be about football.

“There should be nothing done by anyone which would take away from the sporting occasion and which would only damage the reputation of a sport which is open and welcoming to everyone in our society.”