GATES TO COME DOWN AT DERRY’S HISTORIC WALLS 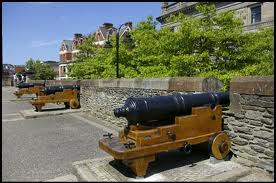 THE majority of the security gates around the historic walls of Derry/Londonderry are to be removed, Justice Minister David Ford has announced.

The Alliance Party leader said 11 of the 16 gates will be taken down over the next few weeks.

As a security back up, an additional £28,000 in CCTV coverage to be installed.

However, Mr Ford said the gates where Bishop Street passes under the walls at the Fountain Estate will remain.

The Justice Minister said the move will help visitors to the 2013 City of Culture enjoy their stay without the “blight” of the security gates.

“In this, the year of Derry~Londonderry City of Culture, the walls will play a central role in the festivities and are a must see for any tourist visiting the city,” said the Alliance minister.

“For tourists and residents alike, I very much welcome the fact that we have been able to remove a number of the security gates that are a blight on these historic walls.

“The walls can now be enjoyed without the imposing structures that point to our past rather than our future.”