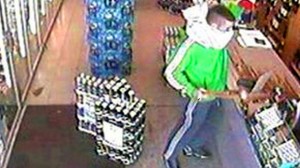 A MAN who robbed an off-licence wearing a pink pillowcase as a mask was so drunk he had trouble making a safe getaway, a court has heard.

And Michael Thomas Cassidy was so intoxicated he couldn’t open the shop door without dropping a baseball bat used in the raid and some stolen drink before staggering away, a judge was told.

Details were disclosed as the teenager was remanded in custody accused of holding up the premises on Cromac Street, Belfast on Monday, April 22.

Cassidy, of Shaftesbury Avenue in Belfast, was charged at Belfast Magistrates Court with robbing the off-licence of £140 in cash, three bottles of vodka, and ten packs of beer.

He faces further counts of having an offensive weapon, namely a baseball bat, with intent to commit robbery, a separate attempted theft and possession of cannabis resin.

Cassidy denies being the man seen in CCTV images published by police following the raid.

Belfast Magistrates’ Court heard the robber entered the store wearing a pillowcase round his neck and concealing his face.

Opposing bail, a detective constable confirmed one officer identified him as being Cassidy after widespread media coverage of the incident.

Defence lawyer Brendan Blaney, who had viewed the CCTV footage, argued that it was not a typical menacing robbery.

He said: “That individual is very heavily intoxicated, to the extent that when they are attempting to leave the licensed premises they can’t open the door without dropping what they are carrying, and then they are seen to be staggering out of the premises.”

The detective replied: “On the video the offender is heavily laden with goods as he’s leaving, appears to be under the influence of some substance and certainly drops some things – including the baseball bat he was in possession of.”

Bail was refused due to the risk of any further offences being committed.

Cassidy was remanded in custody to appear again by video link on Tuesday, May 28.